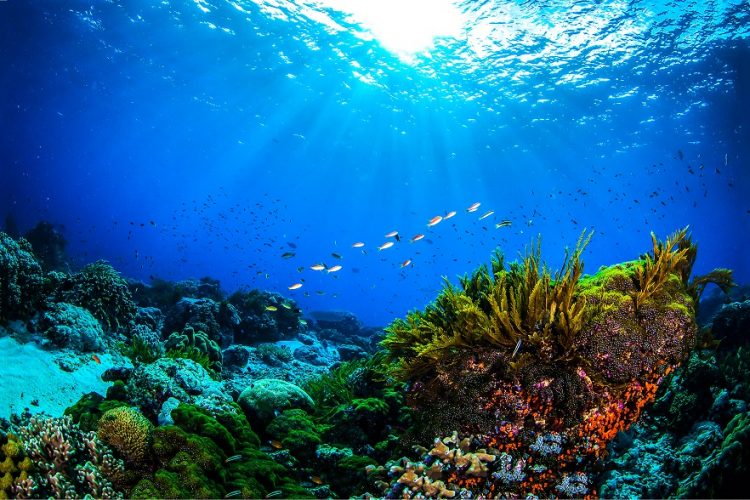 The Ningaloo Reef is one of the world’s most stunning natural wonders. With an enormous array of life underwater, this spectacular underwater paradise is famous for its rich biodiversity, vibrant colours and beautiful corals.

Whether you’re a reef fanatic, avid snorkeler, or a fan of Australia’s natural habitats, here are 7 surprising facts about the Ningaloo reef that you may not know.

1. Ningaloo Reef is visible from space

Yes, it’s true. The Ningaloo Reef is so large that satellite pictures clearly show the stunning reef from miles away. Some parts of the reef are located only a few metres from the shore, making it even more visible from such distances. If you walk down to the water’s edge the reef’s proximity both to the shore and the surface makes it even more prominent and, of course, an excellent snorkelling location.

2. Ningaloo Reef is home to 250 species of coral

It’s no secret that Ningaloo Reef is home to an enormous number of coral species. In fact, 50% of the Indian Ocean’s coral can be found at Ningaloo Reef, making it one of the most diverse reefs in the world. These intricate coral systems are also under threat from climate change. If you find yourself in the area, make sure you’re supporting local tour companies that are promoting sustainable tourism practices.

3. The Reef is home to a vast array of different species of marine life

The 250km long reef is home to a large army of marine life species. There are over 738 species of reef fish, around 1,000 types of algae, 600 different crustaceans, and 655 mollusc species found in and around the Ningaloo Reef. The reef is also home to:

If you’re interested in exploring marine life up close, you should consider booking a snorkelling tour or taking a trip to see the famous whale sharks living in Ningaloo’s depths.

4. Ningaloo Reef is visited by more than half the world’s humpback whales every year

Ningaloo is popular amongst tourists, holidaymakers and, wait for it… humpback whales. Thousands of them find their way to Ningaloo’s balmy waters every year between June and late October. These gentle giants are known for their awe-inspiring displays as they launch themselves out of the water.

Did you know that the Ningaloo Reef is the world’s largest fringing reef? A fringing reef is located on the coastline – and can be accessed (sometimes) by wading into the water from the beach.

Because of its excellent accessibility, Ningaloo is the perfect spot to snorkel and take in the stunning sights without having to rent a boat or swim too far out. This is what makes Ningaloo a popular family destination.

A little known fact is that the Ningaloo Reef is actually named by the local Indigenous clans that have tended to this land for over 30,000 years. The Yamatji peoples of the Baiyungu and Yinigudura tribes who are the original custodians of the region around the Murchison River speak the Wajarri language. In Wajarri, Ningaloo means “promontory”, “deepwater”, or “high land jutting into the sea.” This beautifully references the natural landforms visible on the Ningaloo coast and can be seen as you drive along the West Australian coastline.

For anyone wanting to escape the cooler months and take back the summer warmth, Ningaloo is perfectly situated at a latitude where the waters are forever warm enough to swim. With yearly averages swinging between a balmy 22 and 26 degrees Celsius, you can be sure that your snorkelling trip won’t be ruined by a ‘cooler’ than average day.

That being said, make sure to pack plenty of suncream. Being closer to the equator than most other populated areas of Australia, there is a high chance you’ll get sun touched. Be cautious and bring a sun umbrella if you plan to spend time at the beach.

8. You can swim with whale sharks over the Ningaloo reef

Yes, you read that right. Ningaloo Reef is the ideal spot to swim with whale sharks. These gentle creatures find their way to the warm waters of the Ningaloo Reef to frolic and feed. Growing up to 12 metres long, they are as friendly as they are majestic. If you’ve ever wanted to have a close encounter with one of these beautiful beasts then Ningaloo is one of the best places to have the experience. With several highly experienced and professional tour guide operators, you can be sure that your whale shark encounter will be one to remember. Check out whale sharks Ningaloo to find out more.