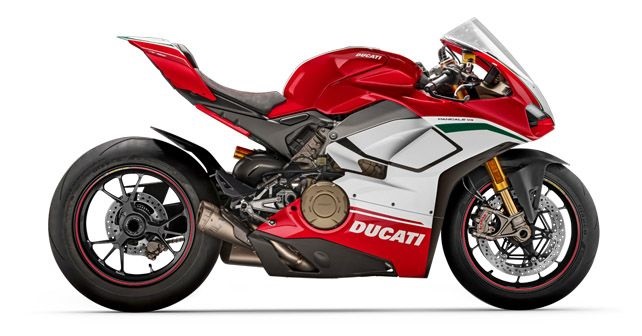 Italian motorcycle maker, Ducati, has revealed the Panigale V4 SP, and Ducati states that the ‘SP’ badge has been added to give it the appeal of a production bike with specific technical equipment, making it faster on the track.

The body panels on the Ducati Panigale V4 SP are the same as the ones seen on other Panigale V4s. However, the stealth black pain theme has been inspired by the Ducati bikes Corse winter test livery. We like the red accents and the contrasting aluminium finish that give it a properly mean stance with those carbon winglets as well. Even the front mudguard is made of the same expensive stuff. It features adjustable aluminium footpegs by Rizoma and a beautiful billet aluminium steering stem. Even bike will come with its individual number, although this is no limited production variant.

The engine and all

The Panigale SP is powered by a BS6-compliant 1103cc, Desmosedici Stradale V4 motor that produces 211bhp and 124Nm of torque, and thanks to bigger exhaust catalysts and a tweaked variable intake system, it now meets current emission regulations. The motor is mated to a 6-speed transmission with a STM EVO-SBK dry clutch that has been designed to cope with the levels of performance this machine has to offer. Even the 520 pitch chain is lighter.

This motorcycles also gets carbon rims that happen to be lighter than the aluminium rims on the ‘S’ variant. This helps reduce rolling inertia, making the bike light while making direction changes. The lighter wheels and various carbon fibre touches have resulted in a weight decrease, bringing it to 173kgs. And the carbon fibre parts we’ve been talking about, have been used from the Panigale V4 Superleggera. Up-front, it features an Ohlins 43mm NIX 30 front fork and a TTX36 monoshock at the rear. In terms of stopping power, it is equipped with new Brembo Stylema R brake calipers in front. It also features the remote lever adjuster seen on the Superleggera.

This bike is brimming with electronics, that include Ducati EVO 3 traction control, wheelie control, engine brake control, cornering ABS, slide control and a bi-directional quickshifter. It also features ‘Race A’ and ‘Race B’ modes, designed keeping in mind track use. The bike is a lot easier on the rider in ‘Race B’ mode, and Ducati states that the SP is a lot more rider-friendly than some of the other Ducatis on sale. When it goes on sale in India later next year, it will cost you nothing less than a whopping ₹ 40 lakh. Also, grab the latest info on the new bikes, only at autoX.