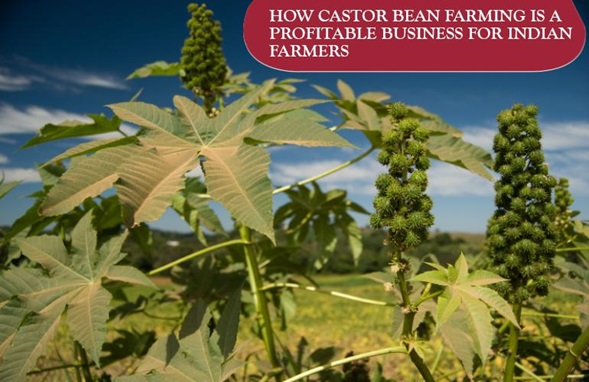 Castor (Ricinuscommunis) is primarily cultivated for its seeds. The pure castor oil extracted can be put to various uses. It serves the purpose of a lubricant in automotives. Also, its medicinal properties are unparalleled.

Castor seeds find use in the manufacture of transparent paper, soaps, varnishes, and plasticizers. Thus, the harvest of castor seeds can prove to be very profitable for Indian farmers.

Castor seeds are indigenous to Eastern Africa, India & South Eastern Mediterranean-Basin. Due to its growing popularity, it is being harvested across tropical and sub-tropical regions of the world.

Castor seeds, rich in triglycerides have ricinoleic acid. Its commercial growing is an astounding success owing to the demand in International Markets.

The crop grows well above sea levels. Its harvest can still be possible at altitudes of 1000 meters. The climate needs to be hot and a little dry for the crop to flourish. The crop is a humongous success in regions where rain is much below the national average. Here comes the word of caution. Castor beans are highly sensitive to humid conditions. Also, temperatures above 40 degrees centigrade can adversely impact the crop yield.

Castor harvest is preferable in lands that aren’t a good fit for commercial cultivation. The beans can be grown in less fertile soils. Soils that are deep, less fertile, acidic, and well-drained are conducive for castor cultivation. The pH level should be around 6.0, to be precise. Nonetheless, good yields can still be witnessed at pH levels between 5.0 and 8.5.

What manures must farmers use to commercialize castor cultivation?

The requirement of sulfur is 25 kilograms per hectare. It should be spread using gypsum during the season of the last harvest. This ensures a better yield of the crop. On-time application of manures promises the best yield. The fertilizer dose should be in the ratio – N:P:K as 40:40:20 kilograms/hectare.

As a basic rule, half the amount of Nitrogen is applied during land preparation, and the other half during sowing, when the soil humidity is just apt.

A good harvest won’t ever promise that the crop remains unaffected by pests. But, pest-treatment can be done tactfully by farmers. Some serious pests in castor-bean cultivation are – semi-looper& capsule-borer. To control these pests, one must use dusting BHC 10 percent in the very early stages. Or, spraying 0.1 percent Carbaryl in the sowing stages can be a better alternative.

Agriculture and allied activities need patience, knowledge, and the right kind of expertise. In this case, the crop maturity would depend on the variety.  The improved varieties mature within a span ranging between 140 and 170 days. The most prominent sign of maturity is when a few capsules in the bunch start drying out! It is the right time that the cluster is removed and well-stacked.

Having said this, harvesting unripe capsules is undesirable. It impacts the oil content adversely. Experts recommend collecting the seeds when they’re just ripe. Post the collection, the ripened fruits must be sun-dried.

Why is castor cultivation an astounding success – The business perspective?

Non-edible pure castor oilis widely used for several industrial purposes. Castor oil manufacturers in Indiaare a little worried about its global price-fall. But, experts believe the future is quite bright and encouraging. Certain properties of castor oil make it ideal for industrial uses. Its higher specific-gravity, thickness & hydroxyl-values are amongst such properties. The export of organic cold pressed castor oilhas grown 12-folds over the last decade. It has risen from dollars 56.17 million in FY-2006 to dollars 703 million in FY-2015. On the flip-side, the export of edible grade has actually nose-dived. The reason could be the availability of cheaper alternatives.

The sunny side is that India is the largest producer & exporter of castor oil in the world. It accounts for around 84 percent of global exports in this arena. It has partnered with China, Europe, Japan, and Thailand in the past. But none could surpass India in this segment. Also, the fact that astonishes most people is that China imports around 31 percent of its castor-oil requirements at dollars 216 million from India. Back in the 70s Brazil happened to be the largest producer of castor beans. Eventually, it went on to become the leading producer of soya beans in the world.

This left India with a virtual monopoly in this regard. But with cheaper substitutes in the market, India is working towards leveraging its monopoly again.

What’s to be done to bring brighter days ahead?

If the industry worked as a cohesive unit, things would soon get better. There cannot be any denial that the entire world population is dependent on India for its castor oil requirement.

So, by this logic, we’re the price-setters. But owing to internal disputes in the market, we’ve failed to work as a single unit. The situation can only be addressed if we stress more on unity.

Owing to a massive dip last year, experts predict a humongous rise in export volumes this year. The main reason is the rising demands from the US, China, and EU. If prices continue to remain stable, we’re ready to be back on track.

The domestic market won’t leave any long-lasting imprints because its consumption is less than 10 percent of the total produce.

The Indian monopoly could only be challenged if Brazil surges ahead of India. So, the financial strain needs to be eased. This simple step could march us ahead. Other incentives to the exporters could be technological advancements. Government investment in the R&D sector becomes imperative. Necessitating agri-infrastructure and imparting more knowledge among producers and exporters are urgent moves. India remains ahead when it comes to taking a front-row in production.

But to brighten the export scenario, it needs to revisit the harvest-conditions next time. An ambitious India has started to take the forefront.